Bringing the heart of God to Timsbury

The name of Timsbury means a wooded vale, a fortified place. It is believed to have Anglo-Saxon origins, and was mentioned in the Doomsday Book. In 1614 the village consisted of about 50 dwellings most of them around the church and Church Lane. Timsbury is on the North Somerset Coalfield and coal mining has played a very important part in the life of the village. In 1916 W.J. Robinson wrote of the village:“ For many generations Timsbury has enjoyed the distinction of being a favoured residence locally for distinguished families who prefer the quiet attractions of the beauties of nature to the more exciting and exacting allurements of the city!”

Parish Church
The first mention of a parish church in Timsbury was in 1292 when Collinson recorded that “the living is a rectory valued at 9 marks three shillings and four pence”, and it has been an integral part of the village since then. There is evidence of monastic settlement in the Priors Hill area, and the monks at Farleigh in Wiltshire held Timsbury in 1291. The list of Rectors starts in 1297 with Henary. But the first foundations of the church on the present site may have been earlier than this, possibly even Norman. The ancient church measured 40’ x 32’ (12m. x 10m.), and was surrounded by fir trees.

The only relics of the ancient church are the tomb of Sir Barnaby Samborne which somehow escaped Puritan zeal, (it now lies in the North transept beside the organ), and some ancient tablets to the Samborne family who, for many generations, were Lords of the manor. Sir Barnaby Samborne was knighted for services to Elizabeth 1; he was her standard bearer, he kept his own body of soldiers at his own expense, and he died aged 50 in 1610.The tomb bears the arms of the Samborne family and the knight lies with his hands raised in an attitude of prayer. The Samborne family took over Timsbury House, an Elizabethan manor, from the St Loe family at the end of the 15th century. It stood at the top of what is now St. Mary’s Close, but was demolished in 1961, only the lodge (in Church Lane) and some of the beautiful estate trees remain. Church registers commence in 1561 and show that the church has been the setting for baptisms, weddings and funerals of innumerable Timsbury people, a tradition which is actively continued today.

The ancient church fell into disrepair in the 1820s and it was pulled down and rebuilt in the Gothic style in 1826. Rev Barter was a great benefactor to the new church, but unfortunately he died before it was finished. Rev John Skinner (Rector of Camerton and diaryist) records in 1825 “Poor Barter had hoped to live to witness the completion of the new church at Timsbury… but this was not to be.”

The new church consisted then of a nave and chancel, built from designs by Sir George Gilbert Scott, the leading European architect who designed Westminster Abbey and the Albert Memorial. In fact, the existing road had to be moved to accommodate the new chancel. Side aisles were added in 1852, when the square benches, side galleries were taken away (evidence of the fixing points are still visible on the outside walls), and the organ was also moved to the north side aisle. [/one_half]

The interior of the church is well proportioned, with slender pillars giving graceful support to an arched roof, and the nave has four bays. The pews around the font were removed in 1999.

On either side of the chancel is a carved stone screen. The pulpit is built of white Portland stone and the panels are elaborately carved with designs.

On the walls of the nave are many monuments to the memory of members of the various families including several to the Samborne family and others to members of the Collins, James, Waring, Langford, Smith, Parish and Crang families. There are two monuments to William Bludenell Barter and Bartholomew Deeke, who each served Timsbury as incumbents for 42 years!

The Side Chapel was originally the Chapel of St Peter and St Paul and two small figurines of the saints stand on the window ledge there. At the back of the church there is a west gallery reached by a flight of stone steps; the bell ringers use this stairway to reach the Ringing Chamber. Originally, the only way to these steps was through a door in the west side of the church. The east window in the chancel shows Christ the Good Shepherd with St Peter and St Paul. The windows behind the organ show St Matthew carrying a child and St Mark holding a lion. In the window at the east end of the side chapel stands St Mary, the patron saint of this church, holding a lily (the emblem of the Annunciation). The other side chapel windows depict St Luke carrying a bull, and St John with an eagle. And on the north wall of the church is a window representing St John and St Benedict.

Church exterior
The tower follows the Norman design and houses a peal of six bells above the ringing chamber. These range in weight from about 6cwt to the Tenor of about 12cwt, and were last rehung at the beginning of the last century. The Sanctus bell is a separate seventh bell salvaged from the former Primary School in South Road where it used to remind the laggardly that they must soon be at their desks. It now performs a similar duty for today’s congregation.
The tower clock is a Benson model (Benson’s of Ludgate, London were royal clockmakers). It was given as a memorial to the parish in 1922 by the daughter of the Rev. Leigh Rendell, Rector of the parish from 1884-1903. It still has to be wound by hand every seven days and strikes on the hour, off the tenor bell.

The oldest dated gravestone is to John Hughes who died in 1780. The most interesting are two gravestones in memory of the same person. One at the north east end of the churchyard and one at the south west end. Both are to the memory of Mary Newth, who died 2nd January 1855, aged 99 years. 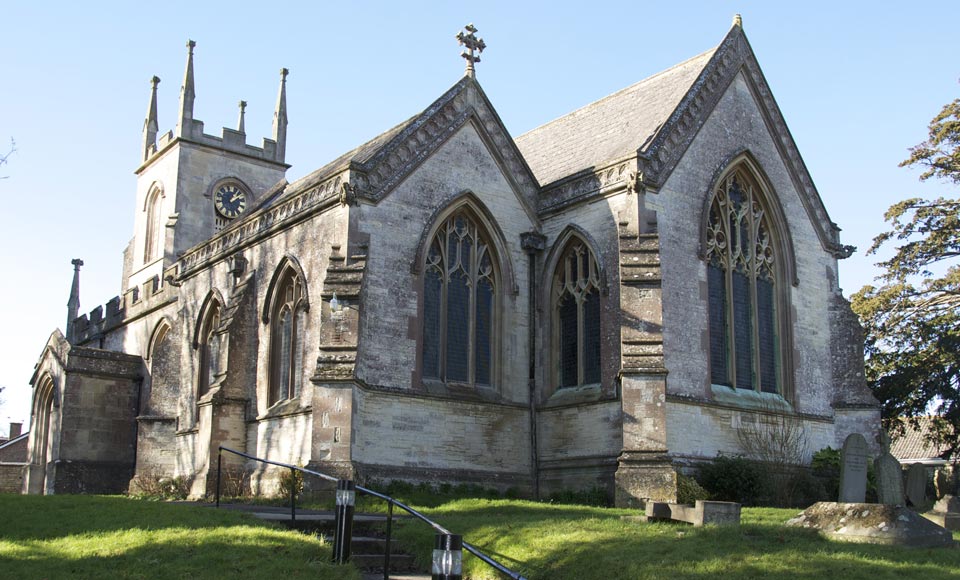